Even in the depths of winter and with Christmas looming Coniston was awash with visitors. The mild and dry unseasonable weather wasn’t the reason though and neither was the attraction of the real ale served in the local hostelries, though it all helped. No, the Hotels and Guest Houses were full to brimming with the rally fraternity who were in town to sample the Grizedale Stages Rally and for some, maybe a beer or two as well!

The rally season may be over for most but one hundred and fourteen crews made the long haul to the heart of the Lake District National Park for the annual event organised by Furness District Motor Club. There were forty-three stage miles on offer following the tried and tested format of four stages in Grizedale and a pair in Dunnerdale with two forty-minute service intervals. The event was a counter to the ANCC, ANECC and KLMC Stage Rally Championships and the decider for the Peugeot 205 Inter Nations Cup contested between Northern England, Southern England, Wales, Scotland, Ireland and the Rest of the World!

Leading the field away from the Coniston start line were 2002 winners Steve Petch/John Richardson in the Accent WRC. This wasn’t their familiar machine however but a newly acquired ex-Armin Schwarz version. They were four seconds off the pace of first stage pace setters Barry Johnson/Stewart Merry who stopped the clocks on 10:11 in the Impreza WRC.

The Evo VI of Doug Hall/Steve Egglestone was third quickest on 10:22, two seconds up on local favourite Steve Head, in a hired Impreza, who had his father David alongside him making a rare competition appearance. Steve soon gave his Dad an early scare with an overshoot right in front of Steve’s 93 year old Grandfather who was spectating! Rounding off the top five was three times winner John Thompson co-driven by Ken Bills in the Escort Cosworth.

The stage claimed a number of retirements amongst the first of whom were Phill Hutchinson/Antony Pearson. About half a mile from the stage start they buried the Sapphire Cosworth so deep into a ditch that it remained stuck there for the duration of the rally.

Petch/Richardson were in pole position by the end of SS2 Grizedale South thanks to a fastest stage time and Johnson/Merry dropping precious seconds following an altercation with a log when the driver cut a hairpin left a little too close. Second fastest stage time moved Head/Head to third as Hall/Egglestone slipped a place and another local crew, Paul Benn/Richard Cooke, moved up to fifth in their Escort Cosworth. Thompson/Bills dropped close to a minute with a deflating tyre. A broken differential brought a premature end to proceedings for the Sapphire Cosworth of Paul Miller/Helen Davis.

Following the first service break the rally moved to Dunnerdale for two short tests where Petch/Richardson and Johnson/Merry matched times on the first run but were two seconds off the pace of stage winners the Accent WRC of Paul Bird/Ian Windress. Petch/Richardson and Bird/Windress then set identical fastest times on the second run as Johnson/Merry dropped a couple of seconds leaving them trailing the leaders by six seconds. A further 25 seconds behind Head/Head retained third with fourth placed Hall/Egglestone another nine seconds adrift. They in turn had a 19 second cushion over fifth placed Benn/Cooke. 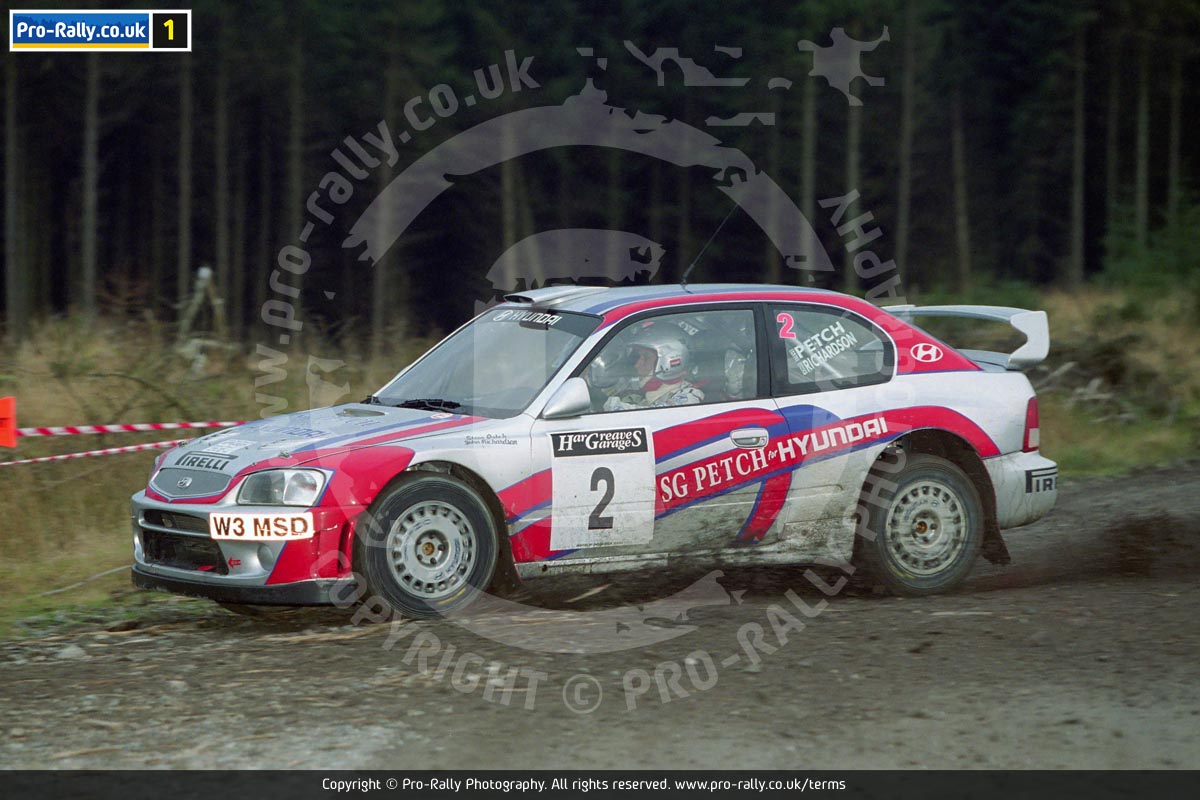 The second of the service breaks was followed by a return to Grizedale for a re-run of the morning’s tests. Petch/Richardson set a scorching time of 9:50 through SS5 Grizedale North 2 followed by Head/Head a second under the ten minute mark. Johnson/Merry set 10:02, despite breaking a driveshaft with a couple of miles to go, whilst both Hall/Egglestone and Bird/Windress were a second slower. This left the top order unchanged but both fifth placed Benn/Cooke and the Evo IV of sixth placed Chris Bown/Roger Bown were coming under increased pressure from Bird/Windress. At a stroke the Accent WRC crew had turned a half-minute deficit into one of only eleven seconds to the Escort and closed to within five seconds of the Evo.

The stage proved decisive in the battle for the KLMC Stage Rally Championship title that was being fought out between the 205 of Paul Whitelock/Jake Carlin and the Mk II Escort RS2 of Mike Dunning/Ed Dentice. The 205 lost it’s complete exhaust system a couple of miles in but worse was to come as a complete loss of gears mid-stage meant end of rally handing the title to Dunning/Dentice.

Alex Allingham/David Hackett had been leading Class B10 from the outset but 500 metres from the stage finish clipped a bank and rolled losing around a minute, not to mention all the Mk II Escort’s glass! Manx crew Richard Curphey/Rob Fagg had a big off losing over five minutes as twenty or more spectators manhandled the Nova back onto the track.

Starting the last stage Johnson/Merry were now eighteen seconds in arrears to Petch/Richardson and with only three wheel drive a win was nigh on impossible. Despite the handicap they were still charging and following a half spin at ‘The Scissors’ Johnson executed a perfect doughnut much to the delight of the crowd.

The stage start hadn’t gone smoothly for the Heads either as Steve stalled the Impreza on the start line. They needn’t have worried though as they did more than enough to secure a comfortable second place. Afterwards Steve said “Dad just waved and looked out of window all day. He loved it!” Just for good measure Head Snr was awarded the Coniston Parish Council ‘Spirit of the Rally Award’.

Barry Groundwater/Jude Wylie took N4 honours in the Evo VI finishing eighth four seconds ahead of fellow Scots Alan Barr/Bill Ballantyne. The Impreza crew became part of rallying folklore when on this event in 2000 they stopped mid-stage to deliver a pint of milk to a friend who was marshalling. No one’s sure whether they repeated the feat this year but the car did have ‘The Milk Man’ emblazoned on its sides and front.

A late charge saw Tristan Pye/Roger Herron snatch tenth by a second in the Impreza as Bob Green/Stephen Hargreaves slipped to eleventh in the Escort Cosworth.

Final stage dramas saw Andy Brereton/Baz Green retire the Mk II Escort after hitting a log and breaking the differential and Richard Allingham/Rory Oliver-Hall putting their Mk II too far off the track to get back. Mick Taylor/Dave Riley laid a smokescreen after one of the Astra’s front struts collapsed and the tyre rubbed away before bursting but at least they made the finish. So to did Graham Gaskell/Dave Gibson after picking up two punctures in the Nova but it cost them over three minutes and around twenty places.

The 205 laurels went to Simon Moore/Mark Mason who with support from Colin and Mark Blunt and Glen Farley/Simon Mills took the Inter Nations Cup Trophy for the North of England team.

View a gallery of photos from the 2002 Grizedale Stages Rally, here.