Competitors headed north for the penultimate round of the 2003 HRCR Historic Road Rally Championship Premier and Nocturnal Challenges. This particular year the Morecambe Car Club event was back on familiar territory with a return to the classic challenging lanes of the Lake District.

It was dry and bright as the thirty-four crews assembled at the Battery Car Park in Morecambe’s West End in readiness for the first leg of the rally that was made up of five tests. Leading the way onto the Promenade for the ‘Mini Morecambe’ opener were last year’s winners Frank Fennell and Kevin Savage. They had a change of machinery this time round having rested the Volvo Amazon in favour of a Mercedes 300SE. 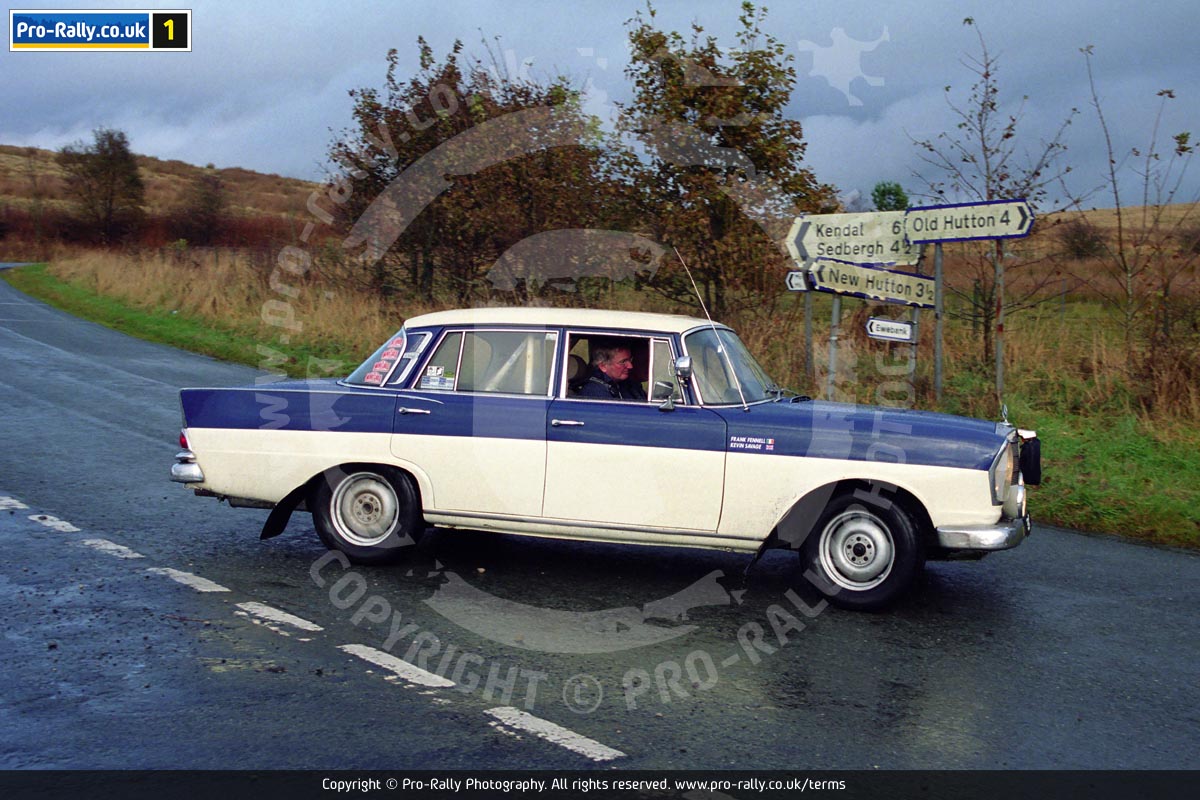 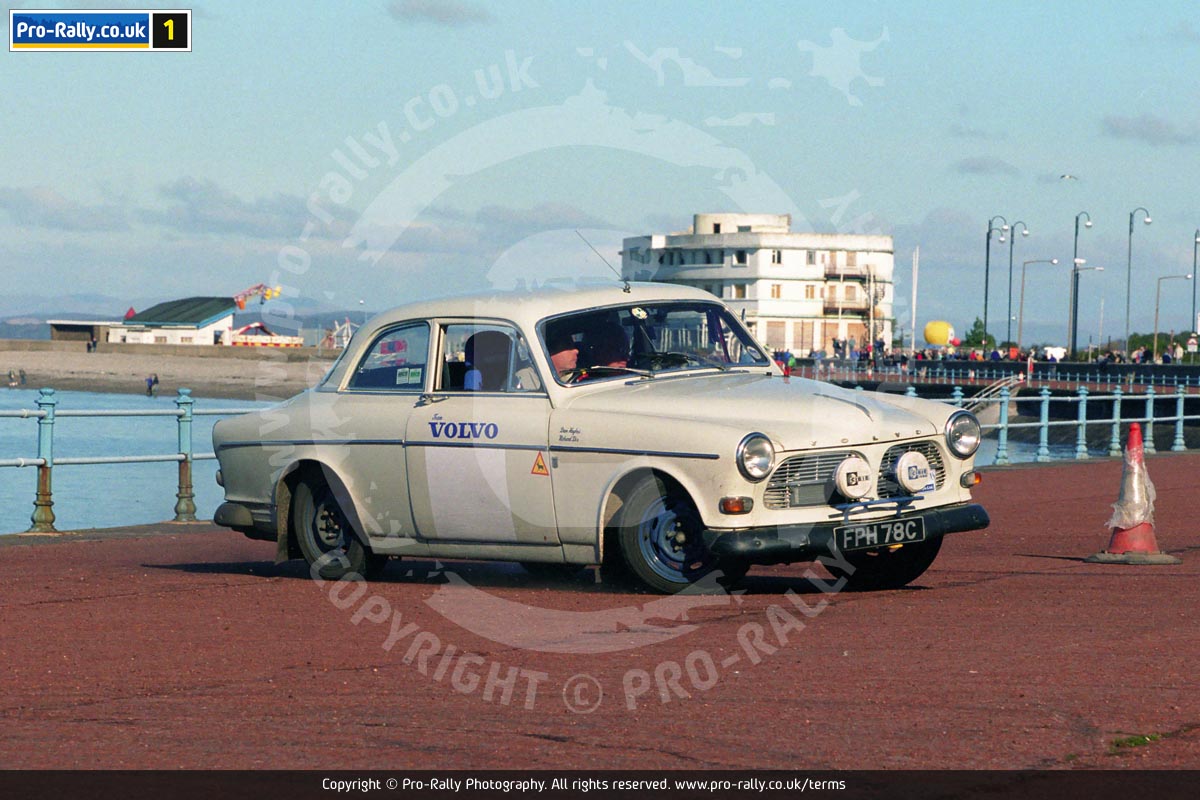 The second test ‘A Bridge too Far’ took competitors north around the coast to Arnside Tower before moving north-east towards Heversham and Levens Hall for Tests 3 & 4 at Park House (‘Gordons Gaff’) and High Barns (‘Room at the Top’). From there came a relatively long road section to Low Biggins for the final test of the leg the ‘Barnyard Shuffle’.

Proving themselves genuine test masters were Ford Escort Mk1 pairing Ronnie Griffin and Fred Bent who were quickest on each, accumulating a time of 4:42. The Mini Cooper of Geoff Hall and Paul Bosdet was next up on 5:17 followed by the similar car of Peter Horsburgh and Bob Hargreaves on 5:25.

The onset of the second leg brought about a change of weather as the clouds closed in and the heavens opened with a vengeance. The afternoon’s regularity took crews north from Kirkby Lonsdale via Barbon and Foxes Pulpit before crossing to the western side of the M6 and looping back around Killington Lake and heading south to Crooklands. It proved a difficult exercise with regular changes in speed and Griffin/Bent blotted their copybook with a missed code board spoiling the good work done on the tests.

Competitors then completed the second leg with a short trip south down the M6 to Pine Lakes for a well-earned three-hour break for dinner.

Saturday night’s third leg of the rally started back on Promenade where crews faced a pair of tests aptly named ‘Moonlight Drive’ and ‘Midi Morecambe’ where Griffin/Bent continued to dominate proceedings. Phillip Armstrong and Frank Hussey ended their rally here when the Volvo PV 544 broke a half-shaft. Adam Wiseberg and Peter Blackett also went no further after their Mini Cooper developed electrical problems. 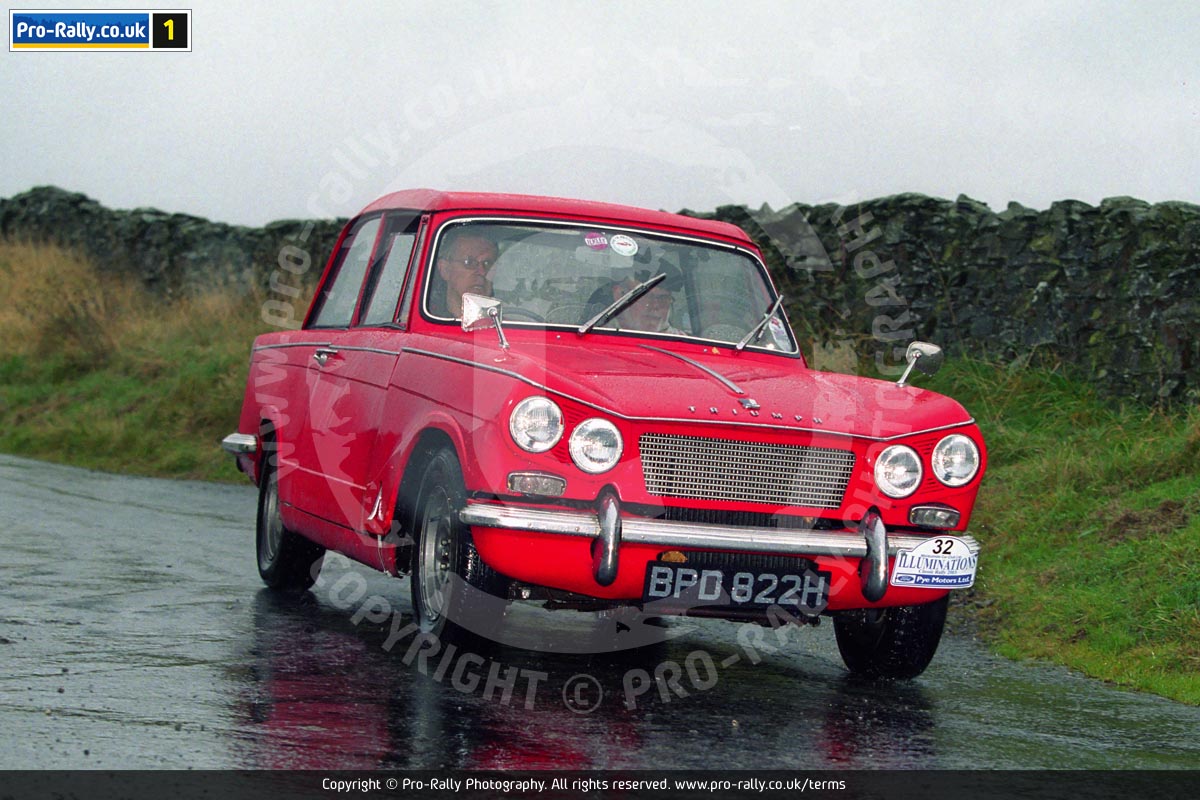 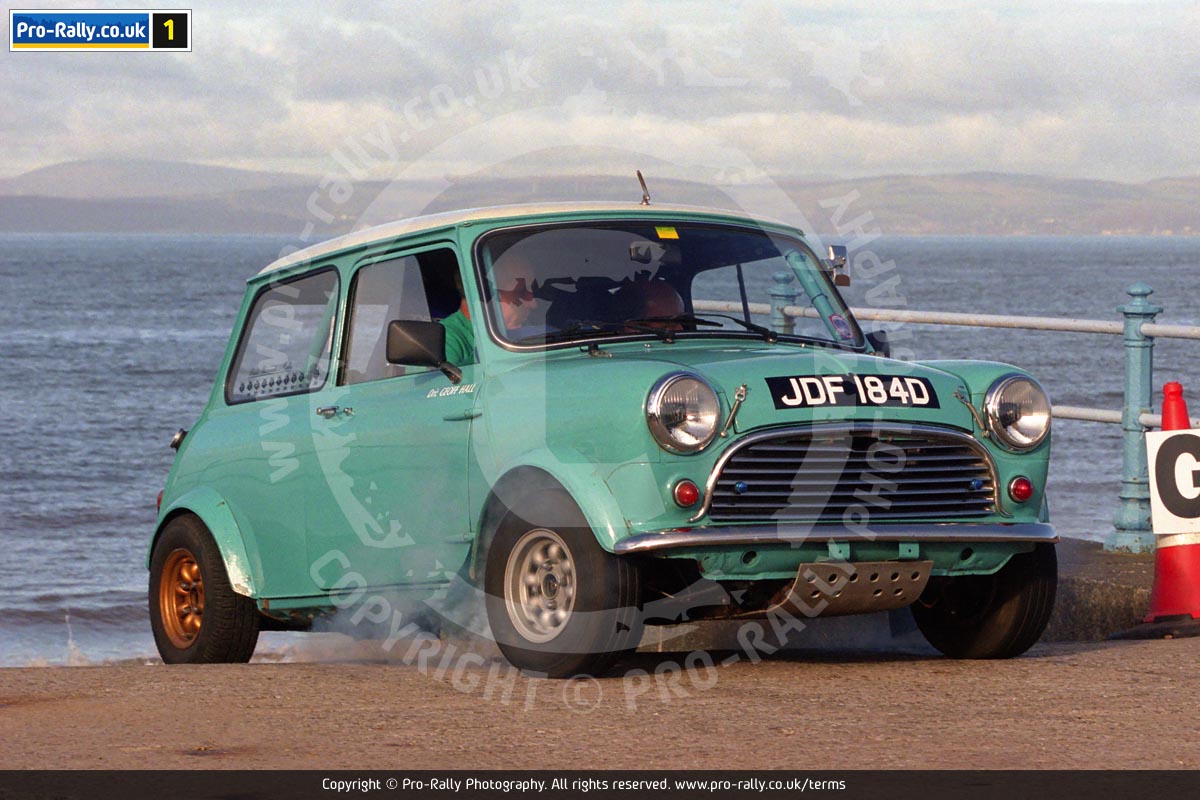 Survivors then headed north to Ings before turning south via Winster Ford, where Peter and Mike Valentine made a big splash in the Mini Cooper, and on to Newby Bridge. From there another devious route via Kendall Ground, Dunnerdale and Birker Fell took competitors north of Gosforth where brief respite was brought by the fuel halt but by this point early leaders Peter Horsburgh and Bob Hargreaves were out, their Mini Cooper having suffered a driveshaft failure.

Anyone who thought the worst was over by this point was in for a very rude awakening. The Passes of Hardknott and Wrynose are not for the faint hearted even if tackled in broad daylight. Auxiliary lighting was an absolute must to pick out the hairpins on the 1:3 descents that came complete with ‘fresh air’ drops. The slightest mistake could prove disastrous so no one could throw caution to the wind. Peter Joy and Matt Fowle broke a wishbone on their Lotus Elite but fortunately this came after the Wrynose summit and they were able to coast out!

With hardly time to recover their breath crews then headed through Tarn Hows, south through Grizedale and Rusland Cross and back to ‘civilisation’ at Newby Bridge. The Valentines only just made it after surviving an altercation with a closed gate but the similar car of Geoff Twigg and Graham Carter didn’t after going off on the corner at ‘Bessie Banks’. 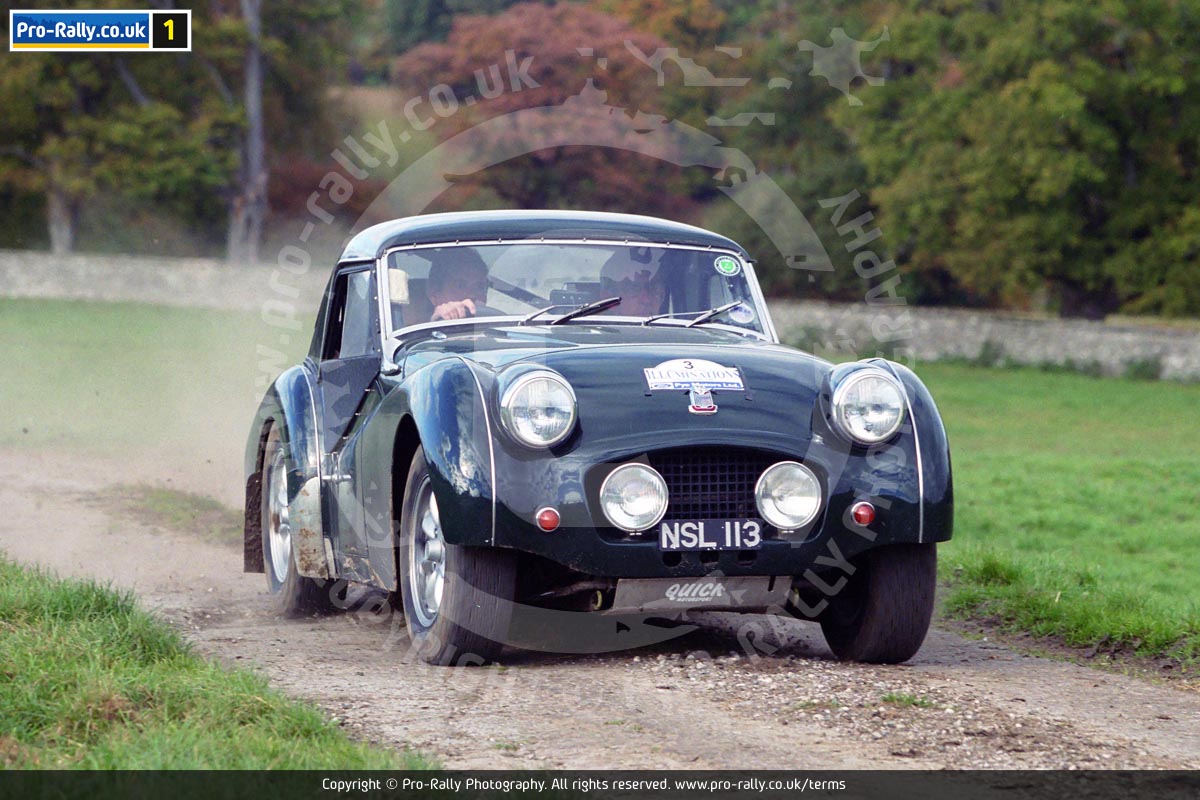 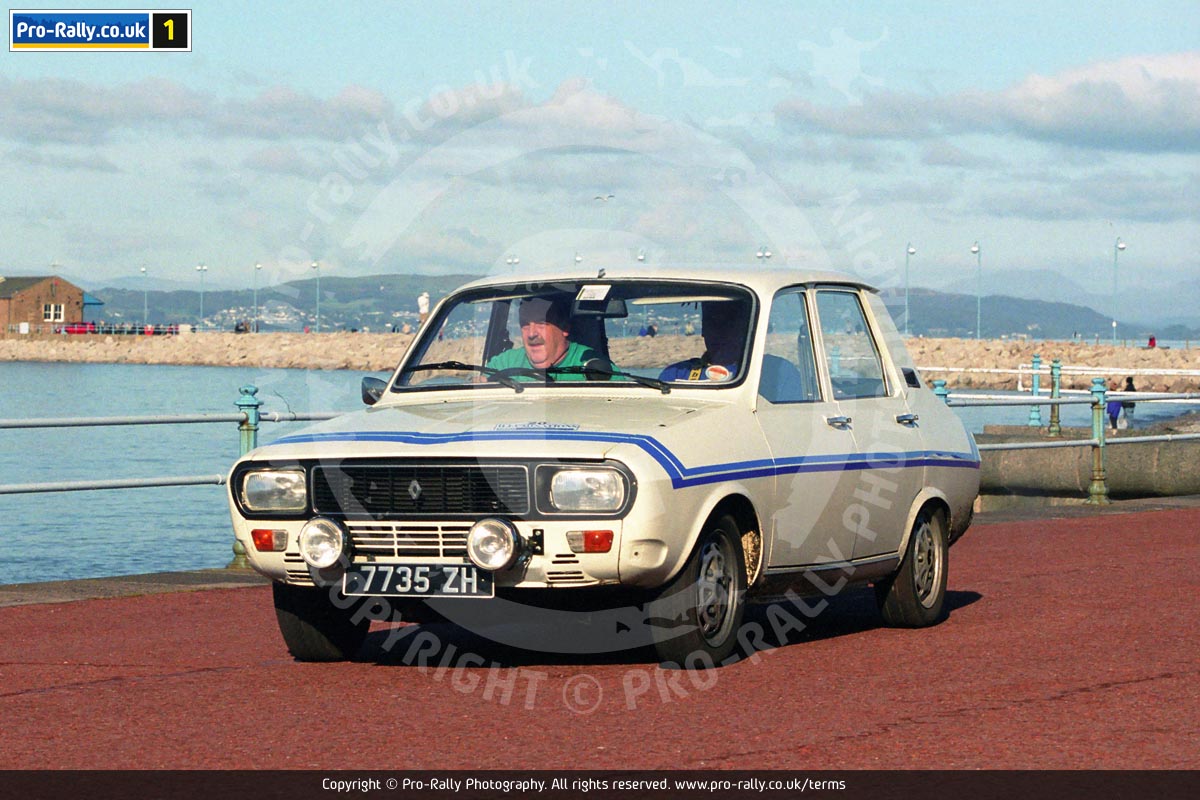 It was also in this section that Paddy Jones and Tony Longstaff found to their cost that it’s not always wise to cut corners. They were unfortunate to find a hidden rock that pushed the Cortina’s nearside wheel back leaving it pointing in anything but the right direction. Their only option was to cut and run, incurring time penalties in the process, but at least it enabled them complete the final road section back to Pine Lakes. Here the wheel was ingeniously straightened by use of a rope and a concrete bollard after which Jones declared “It runs perfectly now!”

Another crew fortunate to make it this far were Colin and Craig Wallace. A failed water pump bearing on the Saab 96 V4 meant it was running hot all night and it was the loan of a water bottle by Ronnie Griffin that probably saved their rally.

Sunday’s final leg provided some non-stop action for the crowds lining the sea wall on a sun bathed Morecambe Promenade. Between the first and final pair of tests competitors headed down the coast to Heysham’s Half Moon Bay for a further test. 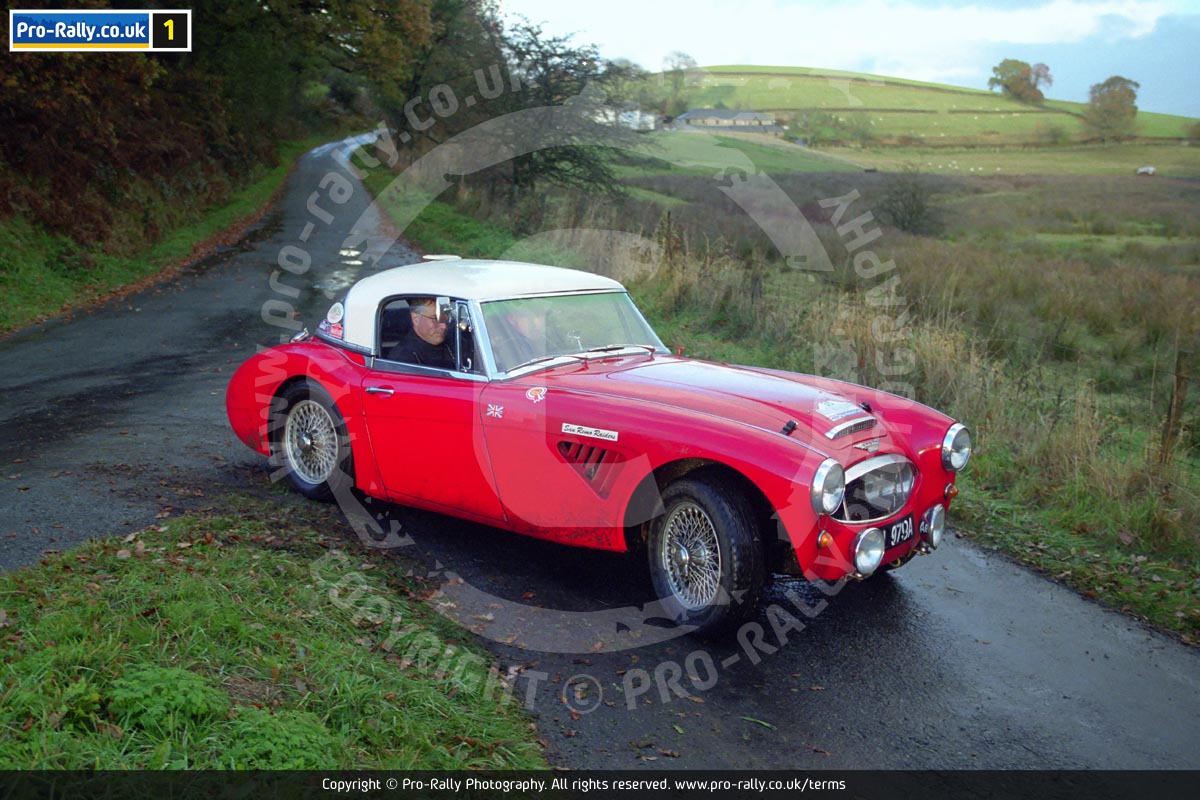 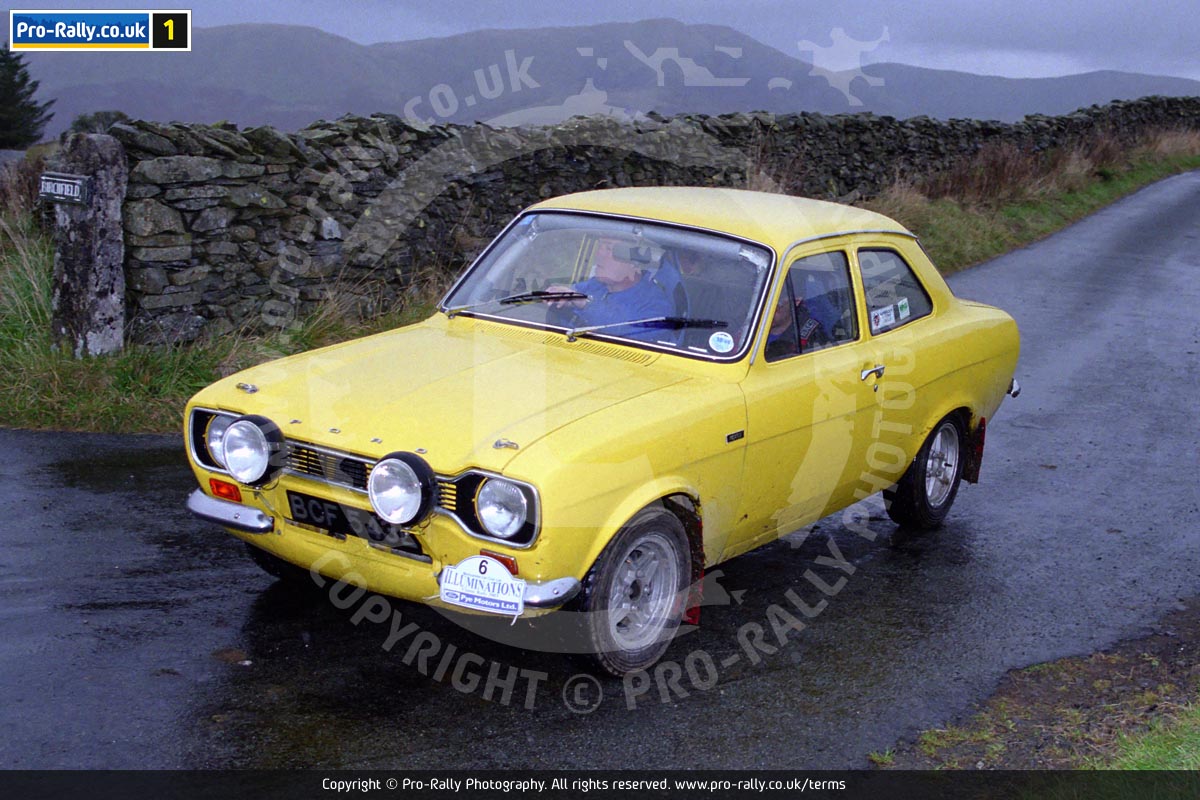 Elgan Davies and Vera Carlin didn’t get to Heysham after their Porsche 356 broke a driveshaft at the end of the Promenade’s second test. Colin and Craig Wallace only made it by re-filling the Saab’s radiator between each test.

The Escort of Ronnie Griffin and Fred Bent ground to a halt within yards of the finish of final test. In a flash Bent was out of the car and pushing it over the line to record a time that was still quicker than many of their rivals. Unfortunately it wasn’t quite enough to score a clean sweep of best test times. The honour of setting fastest time on the final test then fell to Pete Tyson and Neil Harrison in their Mini Cooper.

At the finish it was a hat-trick of wins for local crew Hall and Bosdet over three minutes ahead of top HRCR contenders Hughes and Dix. Fifth overall for Terry Pickering, co-driven by Paul Robinson, was enough to clinch the Triumph TR3 pilot the drivers title.

View a gallery of photos from the 2003 The Classic Illuminations Rally, here.